The Pond has to Go!

After experiencing the darkness of the pond that night Caleb passed away, I knew nothing would stop by determination to destroy it. The darkness of the pond seemed to taunt me that night to say, “I got you, I got your son” but this would not be the case. Had I had some way to use my machine in the dark, I would have destroyed it that very night. Instead, I retired to the house and would spend the rest of that night in anguish wrestling with God as depicted in “The Switch, All for His Glory.” When first light came, I approached the window in the living room that has view of the pond. I continued to stare at it once again as droplets of rain pierced its glassy surface. I looked to the right where my backhoe was parked and knew it was time. The weather was not good that morning and heavy rain was approaching. I went to my garage where I have a 2 inch water pump and drug it out to the side of the pond. I knew that what I was about to do was for Caleb. As I attached the hoses and began to thread the fittings tight, I could not help but feel the world and all its problems strip away. I had absolute focus as if I were a machine. I still hadn’t slept and though I was a bit numb emotionally, I felt I had the strength of an ox.

As my emotions were peaking, the moment to begin my assault was at hand. The pump was ready to go and it was time for me to pull the starter rope. I turned the choke wide open and began to pull with all of my might. Over and over I pulled but the pump would not start. The pond seemed to be winning but I was not about to quit. As much as I wanted to drain this pond, I did run into a disappointing issue with the pump. The pump was sitting in the garage for a couple years and I had left gas in it. The gas was stale and the spark plug was in no way able to ignite the gasoline. The rain began to come down harder. I looked around as I surveyed my options to accomplish my task. I had to remove the hoses from the pump and take it back into the garage where I would begin the task of draining the rancid gas. I am not very engine handy but did my best to drain the gas and carburetor. It was a bit frustrating but again, nothing was going to slow me down. After I drained the gas and put fresh gas in, I walked the pump back to the pond in the pouring rain. My clothes were becoming heavy and saturated with rain water.

I placed the pump back in place and reattached the hoses with great care and determination while hoping the whole time that my gasoline transfusion would be the cure for this pump to do its job. I opened the choke and began to pull the starter rope once again and the first few pulls were a bit demoralizing as there was no response. I was reminded of Caleb in that moment so close to the pond where I was desperately giving him CPR in the grass nearby. There was no response from him either. I started to question destroying the pond for a moment. Was God trying to tell me something? I decided to pull one more time and to my excitement the pump sputtered and blew out a large cloud of white smoke but did not start all the way. I eagerly pulled again and the pump sputtered some more but started! It was not strong at first but I quickly shifted gears to the siphon tube where the draining of the pond would begin. I was a little concerned because Aaron had fish in the pond. I don’t think anyone in the house knew what I was up to. I was on a mission. As the pond water began to spill out down hill into the grass, I had a great sense of relief come over me. Though I was not done, I knew I was on my way.

As the water level became too low for the pump to do its job, I entered the house and saw Elijah and asked for his help catching the fish for Aaron who was still sleeping in the basement. In that moment I was not ready to tell Aaron I was destroying his pond and with sleep so hard to come by, I did not want to wake him. As Elijah was saving the fish, I started disconnecting the siphon and drain pipes from the pump to make room for my backhoe. Elijah would then go back inside and I continued first with removing rocks that were pinning the edges of the liner down into place. As much as I wanted to just trash the pond with my digging bucket, the liner belonged to Aaron and I did not want to harm it or leave rubber in the soil. During this time my father-in-law Ken arrived at our house and approached and began pulling rocks back with me. Though we haven’t had the best relationship over the years, we continued to work without any words being said. I continued and was able to remove the liner from the hole. With my machine in place, I began to bury the hole that was currently a large source of misery.

It was raining off an on pretty good by this time and my backhoe started getting stuck. I had most of the hole covered and as much as I wanted to continue I had to call it quits. Pastor Justin Reese also showed up at that time and also saw what I was up to. I was really starting to feel good about what I just did. Through it was not as therapeutic as I had hoped it would be, I knew that this pond would not be able to harm anyone ever again. We do have visitors and friends with kids of the same ages as Caleb or younger so it was also important to protect them as well. Now I wanted to make sure Aaron knew what I did. I entered the house, removed my shoes and proceeded to his basement bedroom. I explained to him that I had to destroy the pond and I was very sorry. I explained to him that we caught his fish but for some obvious reasons, the pond had to go. He was totally OK with it and understood completely. I would later finish smoothing over the hole when the soil had time to drain as it was fairly saturated with water. I did take some short video for the record and snapped a few pictures of my mission. I don’t have a GoPro camera so I had to make due with what I had. Enjoy. On a side note, I now have a different respect for my father-in-law. I thanked him afterwords. We actually shared a hug after Caleb’s service. This never happened before so its noteworthy. 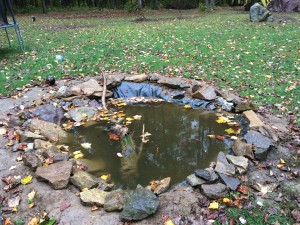 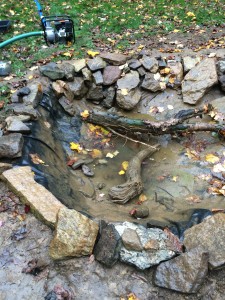 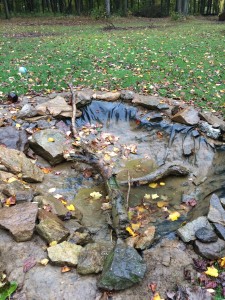 Elephant in the room… What happened that day.