A few days before Caleb passed away, I remember being in my bedroom and I started to hear what sounded like a pencil on the wall. Over the years most of our kids have wanted to draw on more than just paper. Caleb was NO exception. When I turned to hone in on the sound that was all too familiar as a seasoned parent of 7 children, I saw Caleb  with a pencil in his hand scribbling on my bedroom door! Lucky I was close by (15 feet away) and I said , “Hey” in his direction and he stopped for a moment to look over at me. Once he saw me and our eyes met, he tore off running full speed as fast as his two little legs could carry him with the pencil into the living room. “Hey, get back here!”, I said. He knew he was busted. It was a fun game to him.  I would retrieve the pencil from him and this is just one example of many of Caleb getting into things. Out of all of our children, he was perhaps the most curious of his surroundings. From tearing through the cabinets or pulling all the books down off the book shelf, there was no stopping this one man wrecking ball. He loved life and all that it had for him to explore and there was no doubt about it. I am so grateful for the time we did have with him and for our diligence in this information age to capture so many memories in picture and video.

Though I could write many blog entries on Caleb’s conquests in his short life, today’s entry is about a present my wife discovered weeks after his death. At times it was hard early on to see his toys or pictures of him as the reality is so raw and the pain so deep. For weeks my wife would weep each time she would find his clothing in the laundry. With a family of 9, the piles of soiled clothing are deep and the reality of his passing plus the aspect that his clothing in the laundry would no doubt come to a final end at some point was a sorrow filled journey that lasted weeks as his clothes worked their way through the cleaning process.

This present my wife found however was very different though. It was made by Caleb himself and ties to a very specific memory for my wife. For those that know Caleb, he loved to climb onto the kitchen table. Perhaps it made him feel taller in a house of giants. Being the smallest, he liked to be up high. Whether it was in our arms, on my back in the backpack or on the kitchen table, he loved being a big boy. As many times as we would pick him up and place him back onto the floor, he would just climb back up on top of the table. Honestly, it got to a point where we just accepted it. It was Caleb. It’s who he was. I will share a few of those photos now as a prelude to the present. 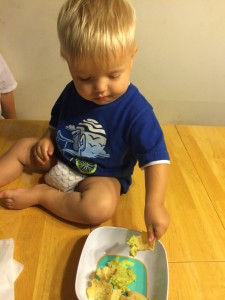 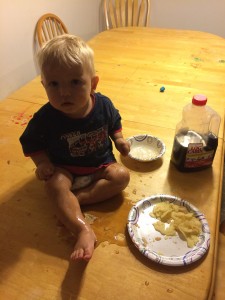 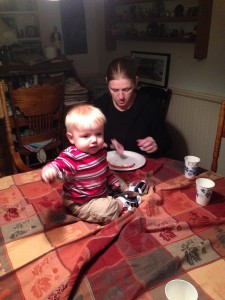 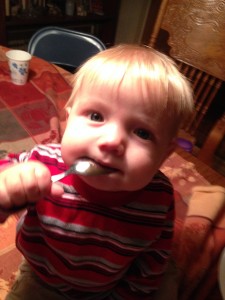 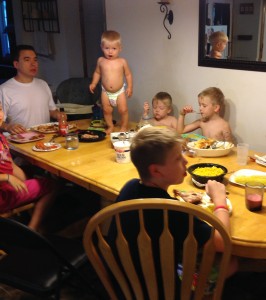 So where the gift begins is a day of painting on the kitchen table. Alexis, Josiah, Isaiah and Caleb were painting pictures with tempera paint at our kitchen table. My wife often would allow them to paint and do other crafts. Caleb loved to do whatever his older siblings were doing and painting was one of his favorites. Anything messy actually. Though I was not there at the time because I was at work, my wife would relay the story to me weeks later after she was looking at the paintings on the freezer in our kitchen. After Caleb passed away, my wife approached the paintings because she knew Caleb painted one of them that day. The problem is even though Caleb had his very own painting he was working on in the color red, Isaiah our four year old son had painted over a lot of Caleb’s work but not all of it. As my wife studied the painting reflecting on that day, her eyes were drawn to a small set of foot prints on the left side of the painting. Could they be Caleb’s?

It was a huge find but we were a little cautious. My first reaction when she found it was to go to Isaiah and put the prints up to his feet just to confirm they were not Isaiah’s. My wife did remember cleaning Caleb up that day as he had paint ALL over him… Including his feet! Though she did not have pictures from that day, her memory is vivid of the event. Our excitement grew as the prospect of this being Caleb’s footprints on the painting would soon be confirmed. I quickly took the painting to Isaiah’s feet to match it up and it wasn’t even close. I held the painting in one hand and Isaiah’s foot in the other and it was obviously not Isaiah’s footprint. We knew right then that the footprints were in fact Caleb’s. This painting event happened just a couple weeks before Caleb passed away. So needless to say, this Painting has become a very precious gift from Caleb to us. It embodies who he was and the fact that he loved being on that kitchen table. So neat. No one should be surprised. Instead of painting from the chair, he climbed right up on top of the table where he could be as close as possible to the action! He dove right in and became the art. His body became the brush and the canvas.

Once we knew the prints were his, we wanted to spend whatever it would take to get this piece framed. To proudly display his work in our home. Though his older brother painted over a lot of his personal work, we know the red was his color that day. Sure it would have been better if it was only his but along with my wife’s memory of the event and the whole story in itself paints a beautiful memory that we can hold onto for years to come. We now have a priceless piece of artwork! Thank’s Caleb!

The next task would be to find a framer. My wife took to social media to ping her friends to find a reputable framer. We did not want to take it just anywhere. The suggestions started pouring in however one started to rise to the top. Some teachers as Brandywine High School had started to volunteer their time and expertise. We were concerned with the chain of custody and it was great because my wife took the painting in and was there the entire time as it was carefully measured. It only left her sight for a few minutes while it was digitally scanned for a high resolution picture shown below. No need to leave it with some frame shop with people we didn’t know. Obviously, before having it scanned, we would only have a cell phone picture of it in case something happened to the original. We are very grateful to those have helped make this possible. I would post their names but this is a public blog and until I get permission, privacy remains. Anyway, below is Caleb’s present. Sure, it may not be famous work of art or prestigious subject matter but coming from our 18 month old son Caleb who is no longer with us, it is absolutely priceless to us. Enjoy! Caleb’s foot prints can be seen in the middle to lower left side of the painting. Click on the picture to see a larger version. 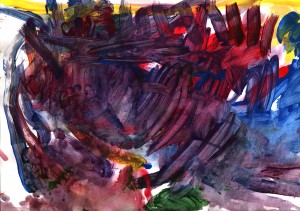 The Pond has to Go!

It Doesn’t Go Away…