Though things have been going “fairly” well, it doesn’t take much to depress me when it comes to Caleb. If Caleb were still alive, we would be celebrating his third birthday April 6, 2016. Though I explained where I was last year around this time when I wrote “Not Two“, again, I am in a different place emotionally this year. In the back of my mind I occasionally am reminded it’s getting closer to April 6th yet this year compared to last there is no comparison. Last year around this time April 6th marked the first birthday we would not have Caleb to celebrate it with. Though I tried not to think about it too much then (last year), I realized on that day just how crushing it really was… How much pent up emotions were setting below the surface…

This year though I made it to April 4th with very little interaction with my emotions when it comes to Caleb’s birthday yet this morning my wife sent me a text message with a picture of a flower arrangement that my father-in-law had purchased to place at Caleb’s grave for his birthday. Though it’s a pretty arrangement, it was in that moment that I was forced to remember my son is dead and he won’t ever be three. Sure, I already know this to be true but normally, my thoughts of Caleb are controlled or in “my time” as I see fit as those type of emotions are best in moderation because if uncontrolled can depress me quite quickly. When I consumed that picture Tiffany sent me through the windows to my soul, it quickly gave me more than what I was prepared to handle and I had to stuff those emotions back down and filter them before they got out of hand… It’s just where I like to be.

It was also during this time that I realized we have another marker in history coming up on May 15th, 2016. This will mark the day that Caleb will be gone longer than he was alive on earth. Another sobering thought among many I had this morning. It sucks. Plain and simple… As much as I try to describe what it is like to lose a child, I fail miserably because the English language does not have enough words to convey such anguish. Yes, I can function as normal but there is always this “icky” noise in the background of my soul that haunts me. It’s not so constant that I can’t be distracted from it but when I have nothing else going on around me or in my brain, that leaves an opening for Caleb to pop in and usually its not “Caleb” or the good things I miss but the fact that he is gone and not coming back or my mind wants to go to the trauma surrounding that event or when there or other “triggers” that take me there outside of my careful control.

From a spiritual perspective, I can be quite bitter at times towards God though that is getting better. I still very much go to church and pray and have a relationship with God but there is a good amount of time where I am just going though the motions and I don’t like it one bit. There are times where I mentally run and reject God in my thoughts (cold shoulder) but it gets me know where. I can’t escape his presence. This is both good and bad… Though there are times I get mad enough and want to run as far as I can, I am left with only myself and the pain of losing my son and God is still there anyway so there is no benefit to running but sometimes I want to even though I know it’s useless… This is where I am at times… Don’t get me wrong, I do press into God and I need to but my desire and my walk has been like a roller coaster this past year as I internalize the reality that God is in control and Caleb was never mine.

Perhaps I should try writing when negative emotions are not so in my face like now with Caleb’s birthday. When I write however, I like to feel inspired to do so. I think in a way I want others who have lost a child to know where I am in my process. If you read my past blogs you would see I am all over the map even though now nearly 18 months after losing Caleb, I am way more steady than I was this year last year even though my writings may not reflect that. I can actually look  at pictures of Caleb and video and talk about him more freely than ever before without it being so intensely painful. Let there be no doubt that I am enjoying parts of my life again. Life is moving on and I do find joy and can laugh again but deep down there is very much  a part of me that is broken and right now so close to Caleb’s birthday the broken part is coming to the surface more than usual so I am writing about it…

I am really enjoying living in Colorado too. The snow capped mountains are food for my soul. I feel God when I see them. I am in awe of his creation and it is very humbling. This is the good part just before I get mad at God for taking Caleb or “allowing” him to die. I know death is part of life and we will all drink from that cup one day but It doesn’t make it easy knowing God is in control and allowed it. I will never understand the big picture until I see God face to face but I know God has a bigger plan it’s just hard and hard sucks. Losing a child sucks. The pain from that event sucks. I would much rather have Caleb and not this pain but I know this life is not all rainbows and unicorns. Perhaps my selfish desire not to feel this pain is why I am mad at God because of course “my way” would have been better right? At least for me and Caleb anyway had I been the author of life… Reality though is writing a much different story and with many plot twists. I just need to keep looking up and trust God because he knows what’s coming around the corner as I obviously do not. It’s what I wrestle with at times… not all the time but it’s where I am at in this process. I just get mad and I know God has big shoulders. He can take it. I am just looking for some understanding and processing something like this is hard to explain.

I am done rambling for now… Rest in peace Caleb Andrew Dubas. I miss you my son. 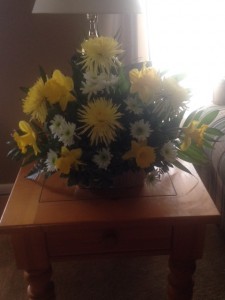 Birthday flowers to be put at Caleb’s grave site. 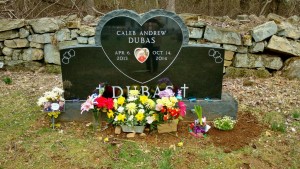 It’s Not About Me